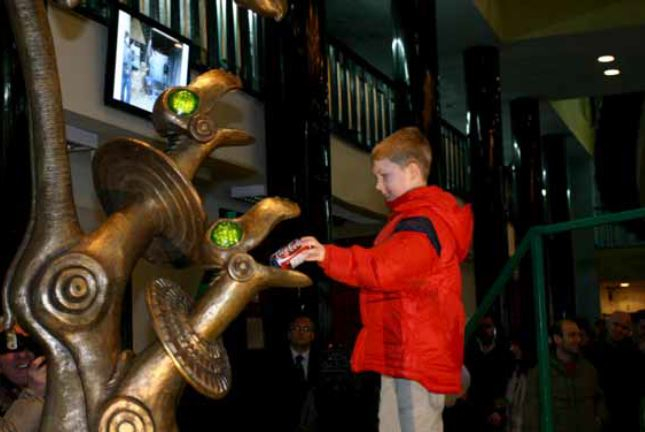 The Blue-Eyed (‘Dragon’) Robot by Biljana Vicković (with the University of Belgrade, Mihajlo Institute, Robotics Laboratory Belgrade, Serbia) has introduced an innovative and socially useful robotic artwork into a public space with tin recycling function. It integrates robotics into an artwork with a demonstrable ecological, social and cultural impact. This robot has been identified by the national coordinators during the meeting in June 2019, to have the potential of becoming a pan-European project to be implemented everywhere as part of the European Robotics Week. “The essence of this innovative work of art is that it enables the public to interact with it. As such people are direct participants and not merely an audience. In this way contemplation is replaced by action”, says Biljana Vicković.

What is it? The artist and creator Biljana Vicković describes the Dragon robot as “a robotic work of art that recycles empty beverage cans and is designed to influence citizens’ environmental and cultural awareness." The Dragon robot is an artistic creation in bronze, with a striking appearance and a surreal form, recalling a mythological creature and universal symbol of European civilisation and history. From dangerous creatures in the Germanic folklore, to protectors of the valuable Ghent belfry, there is no European culture without at least one story about dragons.

The Dragon robot also sends a message about some common, everyday activities, such as material recycling and sustainable development, since it is powered by solar energy.  Recycling is a pan-European issue, with each person currently producing, on average, half of tonne of waste. Only 40 % of it is reused or recycled and in some countries more than 80% still goes to landfill (source). Therefore, the Dragon robot sends us a message to take care of our environment along with raising our social, cultural and technological awareness and education. By its appearance it makes us think a little bit as we carry out the planned task and rewards us accordingly.

“The Dragon voice message says: ‘Hello, do you have some cans for me? I’m hungry’ which is followed by a glint from the big blue eyes from all four heads of the Dragon. This humorous neighbour has daily communication with the citizens. After being approached by the user, the Dragon opens his beak, to make room for pushing and loading the can, commenting: “Yum yum, you can drop it down here. Once the can is inserted, the robot gives you a tip: “Here is your ticket, and thank you for taking care of our municipality’s environment.” Each user of the blue-eyed Dragon robot gets a numeric code on a ticket by inserting cans in the robot. This is an ideal way to think about our environment and about the life education of the coming generation, whose awareness of their own actions will inevitably increase through this ‘game’. Therefore, the Dragon robot is inter-disciplinary-oriented and the visitors themselves play an active role.”

Video of the Dragon robot


The Blue-Eyed (‘Dragon’) Robot was at the centre of two events in Serbia. The first event was organised in the original space in which the robot was exhibited, with the purpose of giving it a name. Following the selection of 30 options out of 600 proposals and a public vote, the dragon was named Limenko Gutic. The second event was meant to promote the ecological message among the Serbian youth and not only. The event consisted of a video game creation contest between different municipalities teams, formed by school students. The aftermath of the competition was that the Blue-eyed Dragon Robot was placed in the winning municipality of Bor.

Watch the documentary and animated film

The Blue-Eyed (‘Dragon’) Robot benefits the community, by mixing culture, history, art and technology: it promotes recycling in a creative and entertaining way, it develops local economies through the possibilities of the serial production of the robot, and it preserves our cultural values, all with one project. What can be better than that?