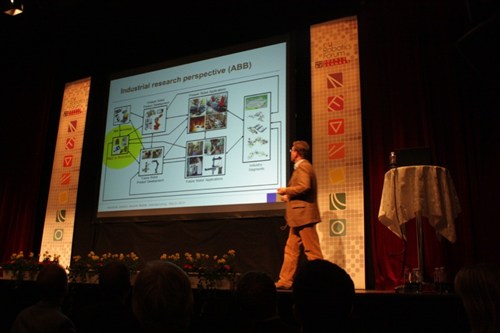 The three intensive forum days at ERF2012 were concluded on Wednesday the 7th of March. Researchers, representatives from the robot industry and a number of official representatives from the European Commission - 550 in total - visited the forum and participated in the more than 40 workshops. Many expressed great satisfaction with their participation.  Here is a quick retrospective overview of the forum.

Shortly after the  official opening, attended by the Danish Minister of Science, Innovation and Higher Education, the entire area surrounding the European Robotics Forum 2012 was buzzing with life. People were walking, chatting, working, and attending workshops. The forum had begun!

With most people arrived and settled in, the delegates now devoted themselves to attending workshops. The program offered six tracks, fully packed with interesting workshops stretching over more than ten hours. A cosy candle-lit conference dinner was held in the evening, nicely rounding off a busy day at ERF2012.

The third and final day of ERF2012 continued in the spirit of the two first days with 14 interesting workshops, keeping the delegates busy. Judging from the mixture of acknowledging smiles, quiet conversations, cheerful discussions, and thoughtful expressions filling the premises in Odense, the delegates were truly enjoying the opportunity to extend their network and create new working collaborations.