Robotics_Forum | 22.03.2019
Bucharest was the European capital of robotics for 3 days in a row
Tweet 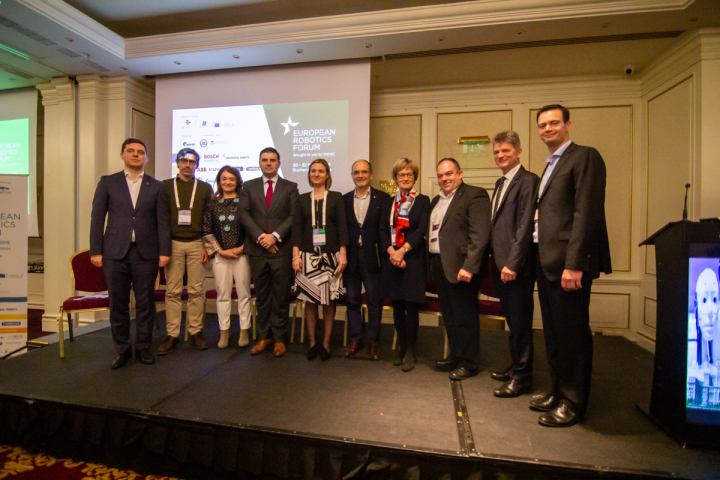 European Robotics Forum, the most influential meeting of robotics and AI community, held its 10th anniversary edition in Romania. The event was organized Under the High Patronage of the President of Romania and Under the Patronage of the Romanian Presidency of the Council of the European Union.

The most advanced prototypes, high end technology projects, financed under Horizon 2020, were exhibited to be admired and analysed at JW Marriott between 20 and 22 March.

Among the robots that were displayed one could find: the famous REEM-C – the humanoid robot that speaks 9 languages and that costs 1 million euro, QT – the robot especially created to help children who suffer from autism, Trimbot – the gardening robot that will help cut the roses and the bushes, as well as other prototypes that take innovation to the next level. Among the exhibitors we could also find Romanian companies that invest in the potential of robotics in our country by developing advanced software solutions for international robotics companies.

European Robotics Forum was also a great opportunity for a multidisciplinary approach of some essential topics related to the future developments of technology in Europe. 900 experts gathered in over 50 workshops to discuss the future of robotics and AI into an European landscape that is shaping its future more and more under the sign of technology and innovation.

”European Robotics Forum is THE annual event for robotics in Europe, gathering a vibrant community, with more than 900 participants from Robotics and neighbouring communities, such as big data or cybersecurity, offering a unique opportunity for academia and industry to discuss and boost together science and innovation. We count on the robotics community to drive the development of AI in Europe, being at the forefront of the digital transformation for the benefit of our economy and society”, said Lucilla Sioli Director “Artificial Intelligence and Digital Industry”, DG Connect, European Commission, within the Opening of the Forum.

"The European Robotics Forum 2019 put one more time Romania on the innovation map, highlighting the potential that we hold into the technology field, an extensive area that will dramatically influence the future of all", said Ana-Maria Stancu, President E-Civis, local organizer of the event and member of the euRobotics Board.

The European Robotics Forum 2019 is organised by euRobotics under SPARC, the Public-Private partnership for Robotics in Europe and hosted by E-Civis Association. ERF2020 will take place in Malaga, Spain, on 3-5 March 2020.

The winners of this prestigious pan-European Awards were:

The Entrepreneurship Award 2019 (First Prize) was given to IM Systems - Jack Schorsch.

ERF2019 was also the perfect opportunity to announce the European Robotics League awards.

See all Awards 2019 winners and finalists

SPARC is the largest research and innovation programme in civilian robotics in the world, with 700 million euro in funding from the European Commission between 2014 to 2020 which is tripled by European industry, to yield a total investment of 2.8 billion euro. SPARC will stimulate an ever more vibrant and effective robotics community that collaborates in the successful development of technical transfer and commercial exploitation in all regions (old.eu-robotics.net/sparc).