The European Robotics Forum 2018 (ERF2018), the most influential meeting of the robotics community in Europe, takes place in Tampere on 13-15 March 2018. ERF brings together over 900 leading scientists, companies, and policymakers for the largest robotics networking event in Europe.

Under the theme "Robots and Us", the over 50 workshops cover current societal and technical themes, including human-robot-collaboration and how robotics can improve industrial productivity and service sector operations.

During the opening of the ERF2018, on 13 March, Juha Heikkilä, Head of unit, EC DG CNECT, explained that "the European Robotics Forum has been instrumental in breaking down silos and bringing together a strong, integrated robotics community in Europe. This year's theme, "Robots and Us", reflects the increasingly broad impact of robotics and allows discussing not just technology but also the all-important non-technological aspects of robotics." 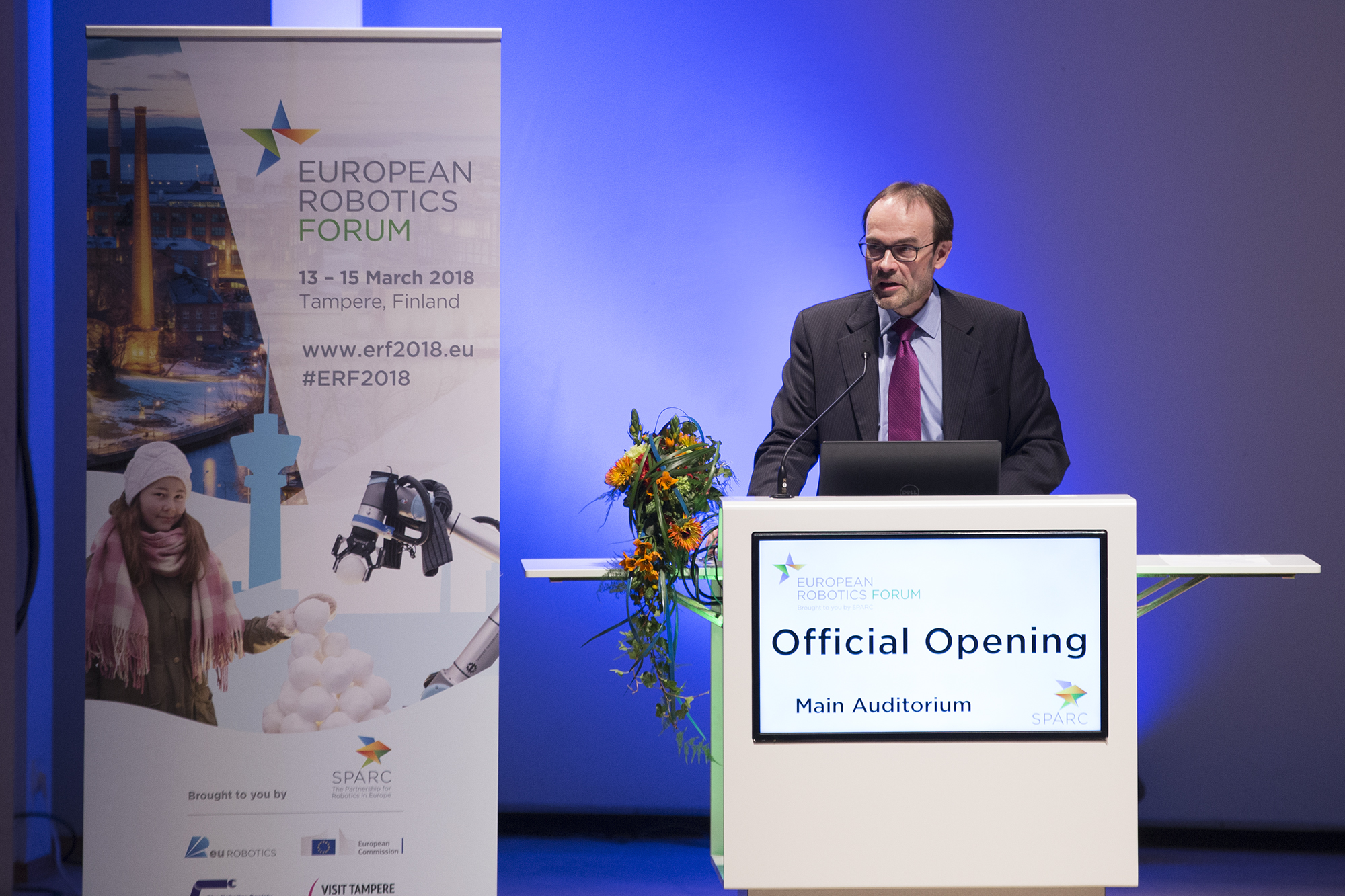 Bernd Liepert, President of euRobotics and Chief Innovation Officer at KUKA highlighted that "“Robots and us” implies that we need to put significant work in topics such as safe human-robot interaction on the technical side, but also raise awareness about the offerings of modern technology to the wider public." 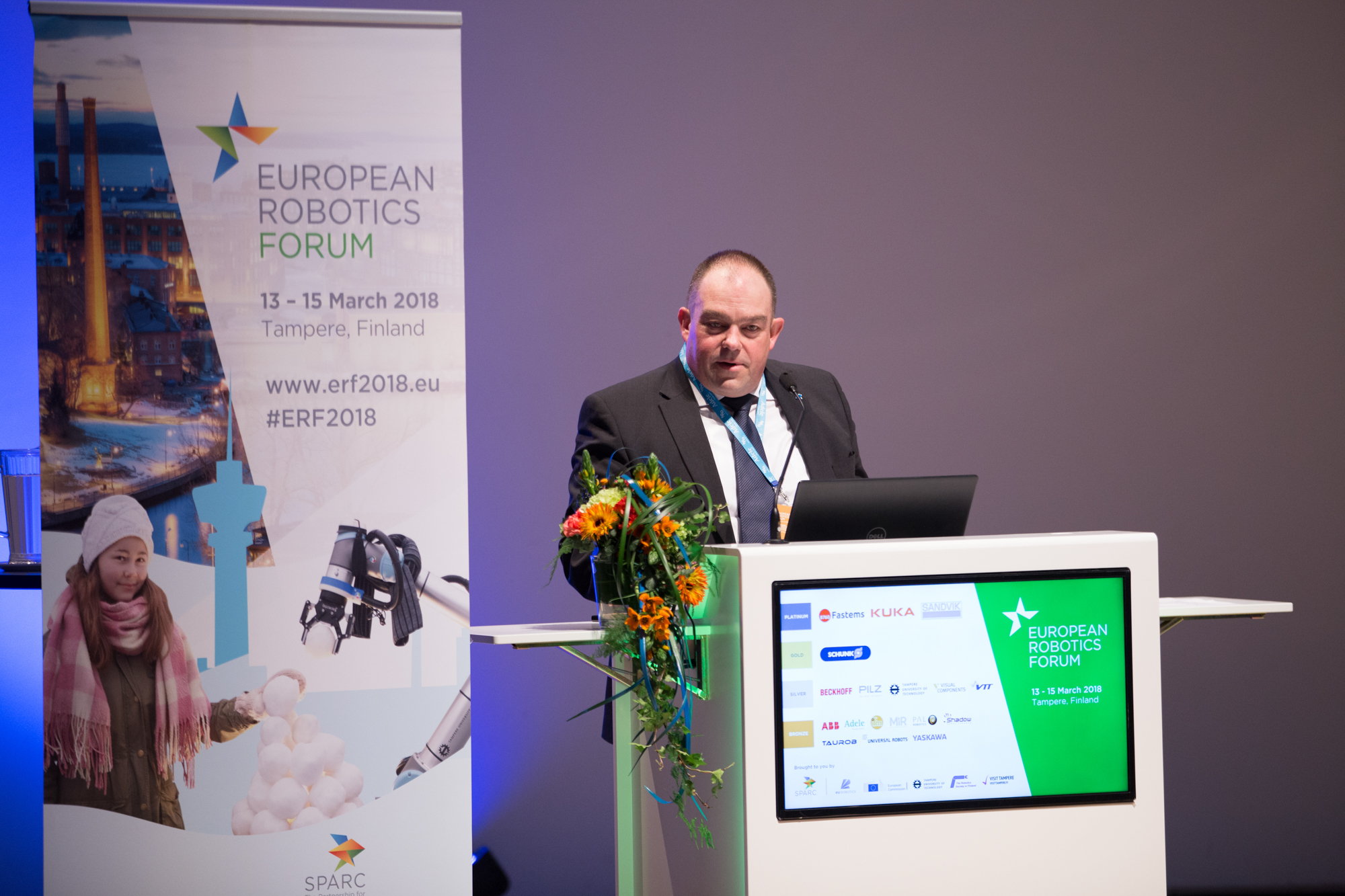 Anne Berner, Minister of Transport and Communications of Finland, emphasized in her keynote that “digitalization and robotics require changes in mindset from both the public and the private sector in Finland. We, as the public side, create a framework for change, but the responsibility for implementing lies with companies. Robotics and automation walk on the road paved with data. Data that is not shared is benefitting no one. Data needs to be combined with other data and then refined and enriched with knowledge to create value”. 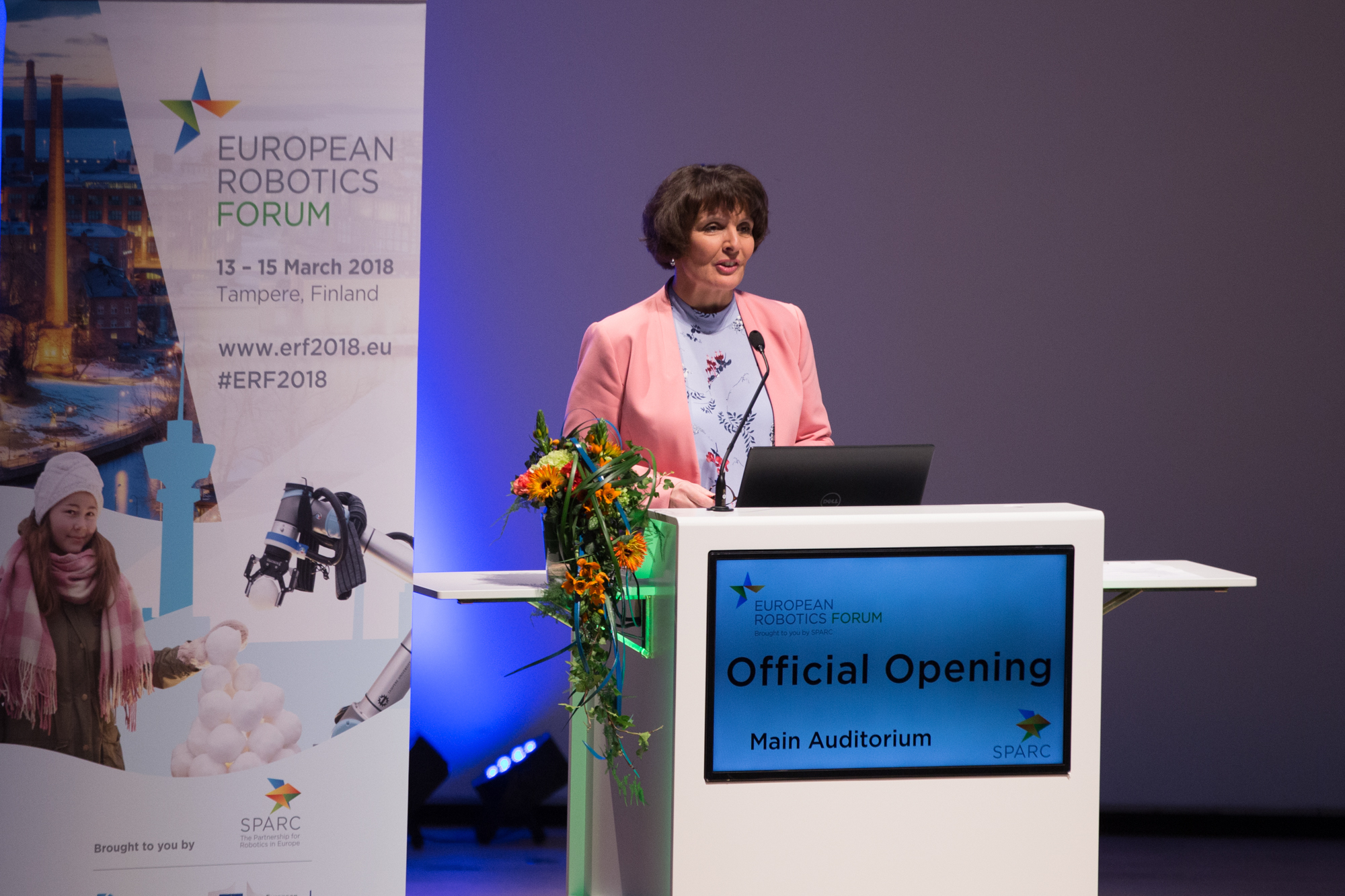 Tomas Hedenborg, President of Orgalime and Group CEO of Fastems, added that “in the era of digitalization, automation and more specifically robotization, is in the core of the transformation. The huge innovation potential includes major societal challenges that need to be tackled in parallel." 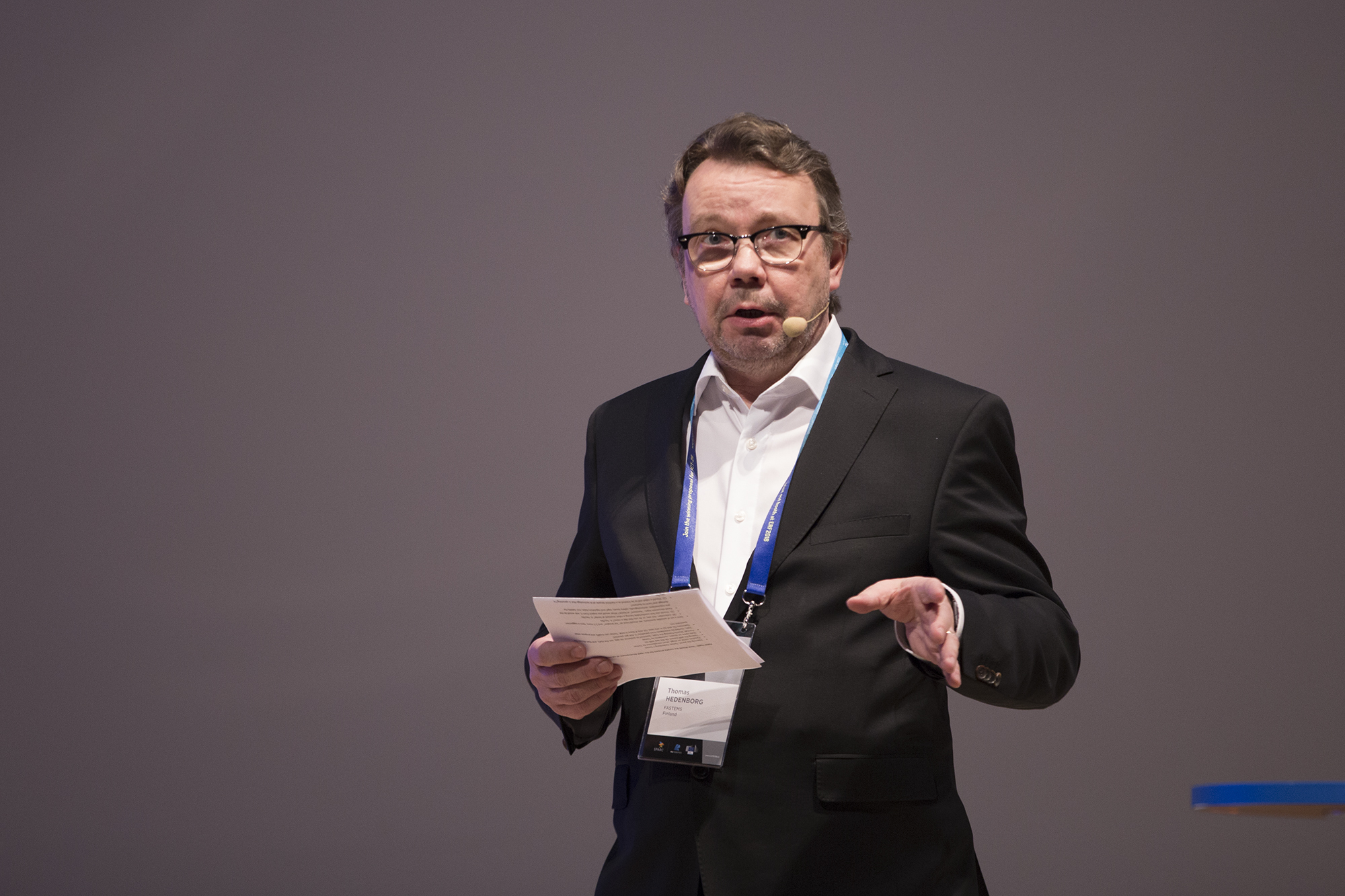 The end of the Opening saw a panel discussion about “How should the society prepare for the rapid development of robotics” with the keynote speakers and representatives of the local organisers. 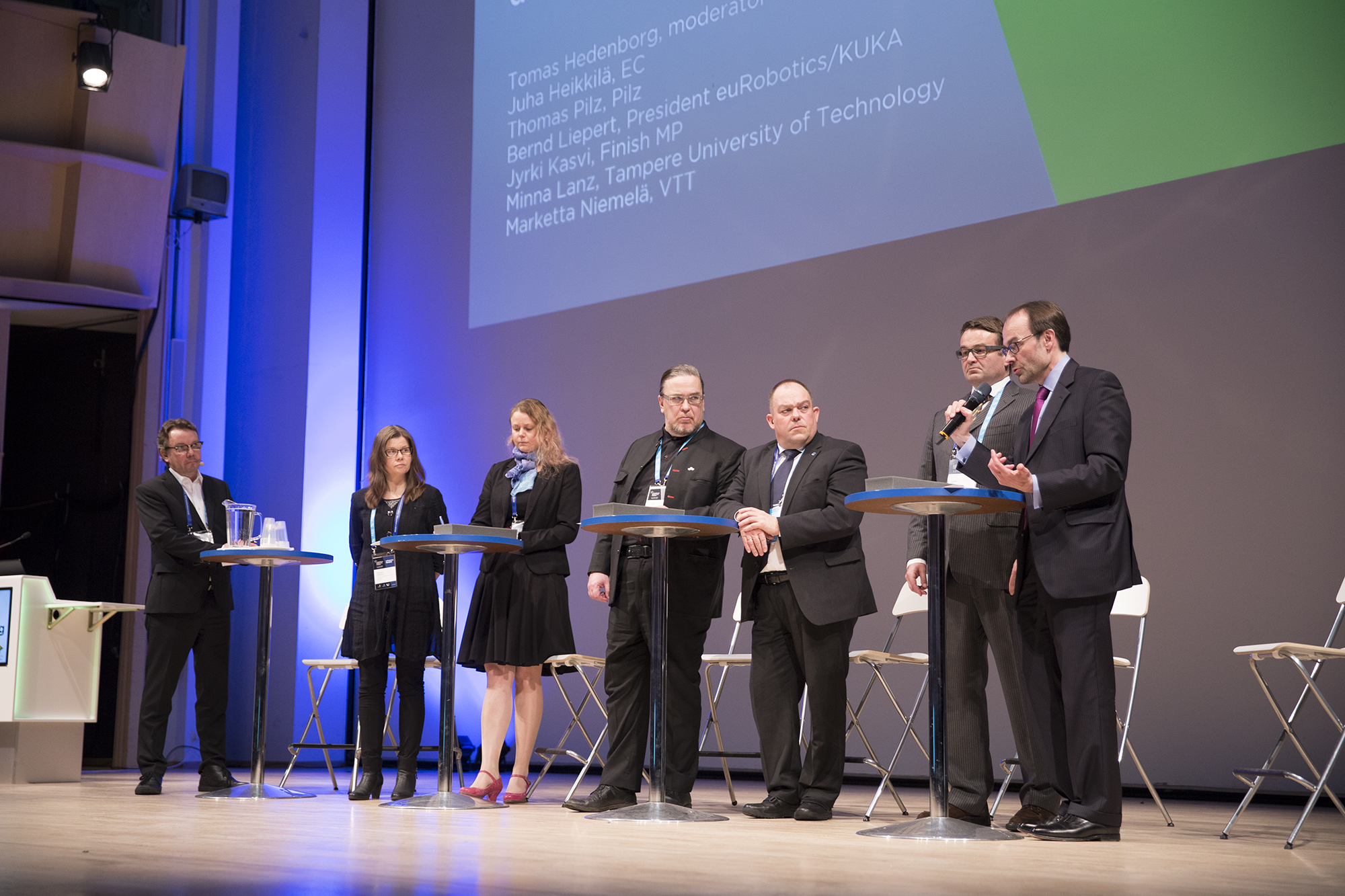 The conference showcases the newest research in the field, and the projects funded under EU’s Horizon 2020 research programme. By bringing together over 50 sponsors and exhibitors, amongst them Fastems, KUKA and Sandvik (Platinum sponsors) and Schunk (Gold sponsor), the event offers a unique window to the European robotics, also putting the spotlight on the Nordic markets.

ERF2018 had the honour to welcome Markku Markkula, First Vice-President of the European Committee of the Regions, who visited the exhibition area and gave a speech at the reception hosted by the Tampere City Hall. 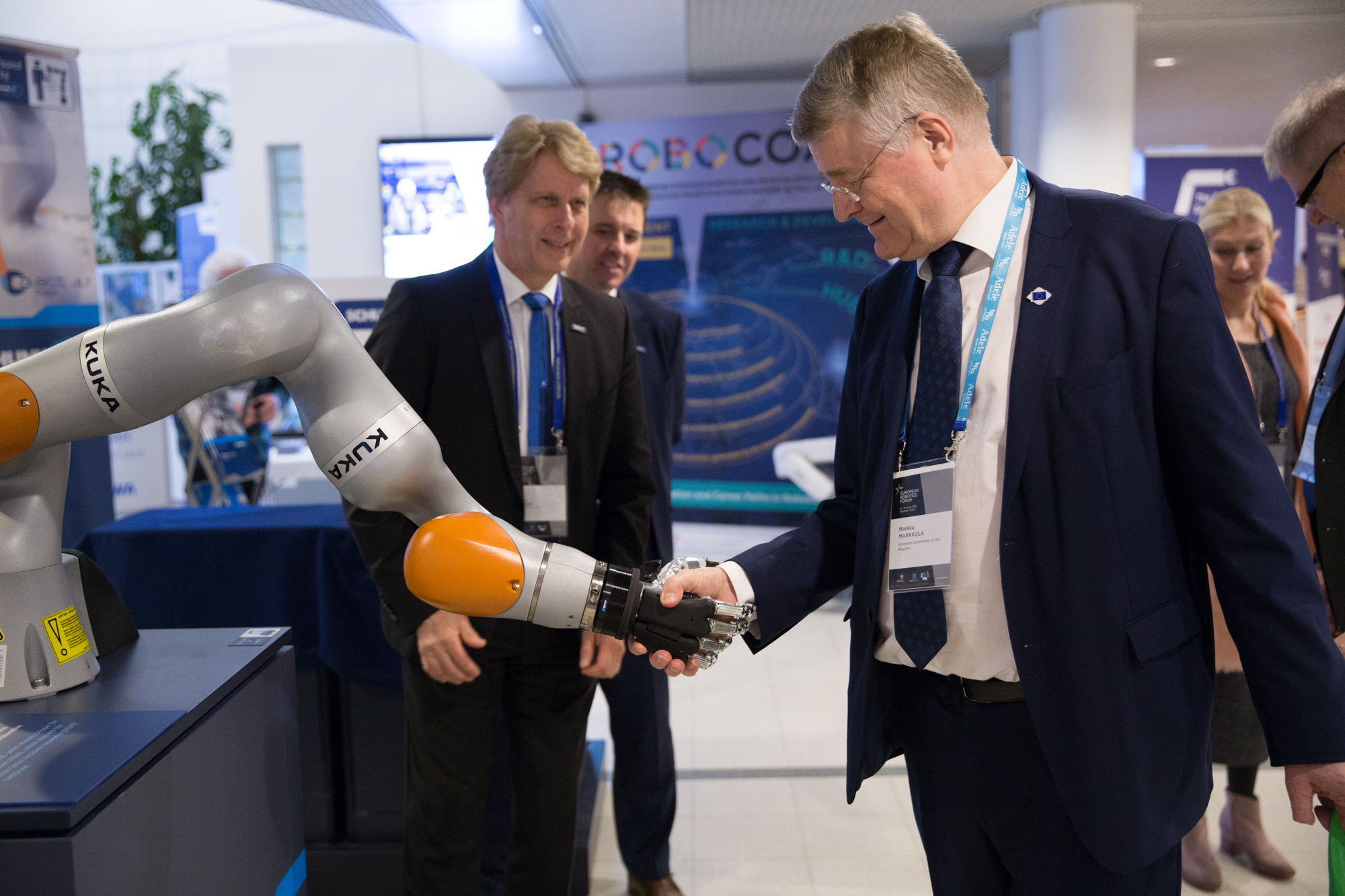 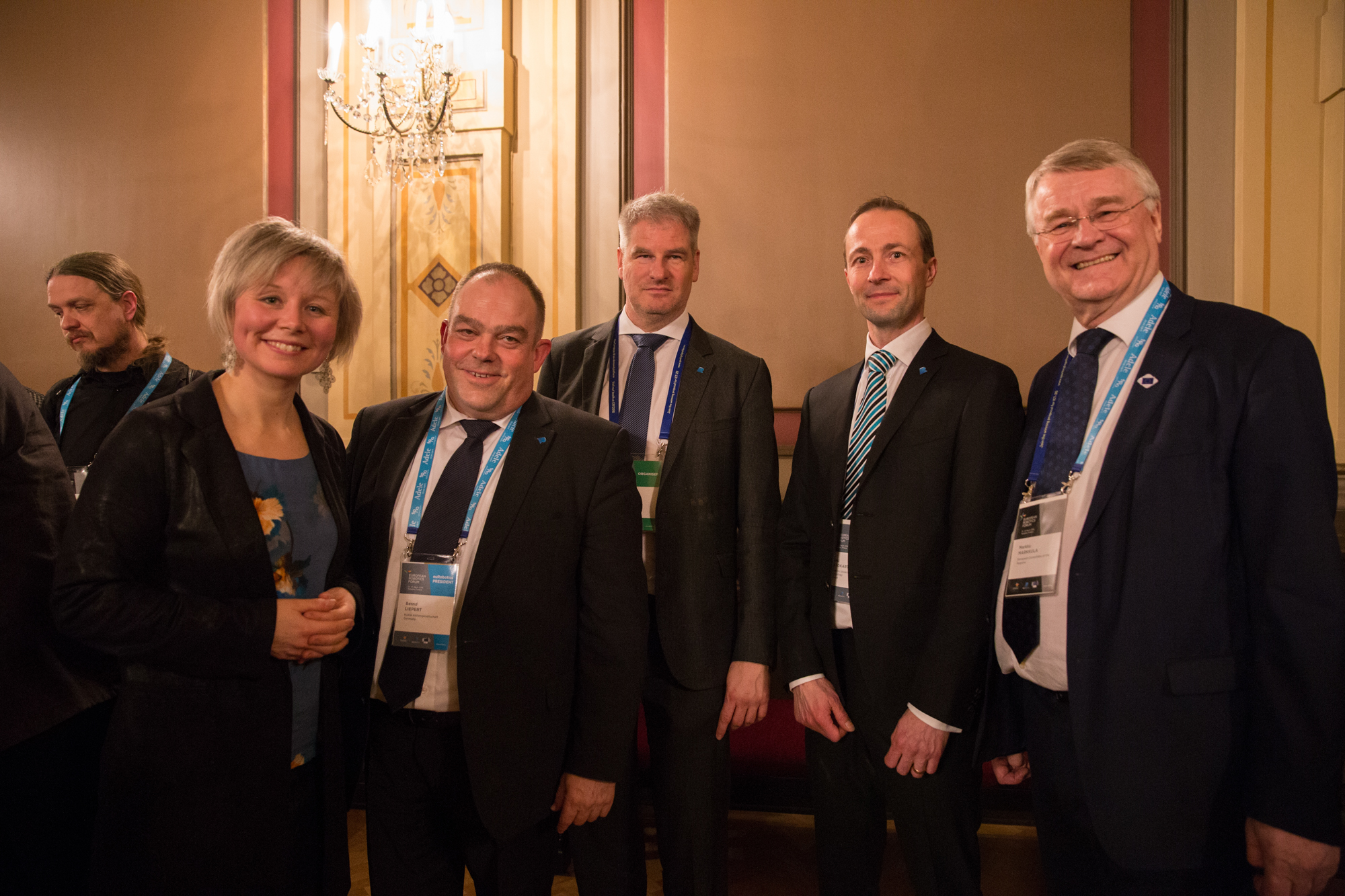 The Awards Ceremony on 14 March will announce the winners of the Georges Giralt PhD Award 2017 and 2018, the TechTransfer Award 2018 and the European Robotics League Season 2017-2018 Awards.

After its start in San Sebastian in 2010, The European Robotics Forums has grown into a major annual event with hundreds of attendees every year. In 2017, the conference was held in Edinburgh.

The European Robotics Forum is organised by euRobotics under SPARC, the Public-Private partnership for Robotics in Europe.  ERF2018 is hosted by The Robotics Society in Finland in collaboration with Tampere University of Technology.

Journalists may request a free press pass, or support with interviews, by contacting: