Robotics_Forum | 10.12.2018
European Robotics Forum 2019 to be held in Bucharest announced during high level round table
Tweet 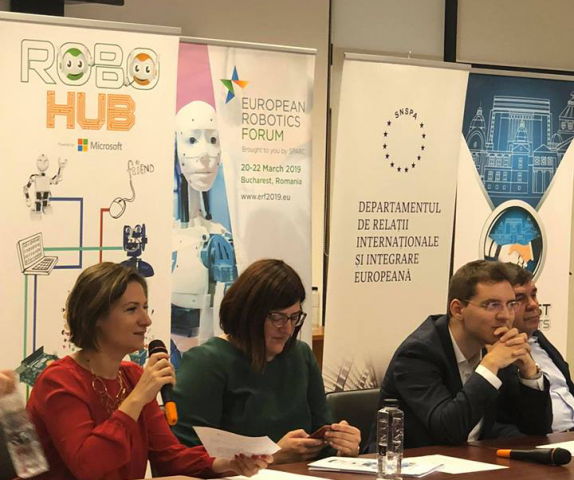 10 December 2018, Bucharest, Romania - E-Civis and the National School for Political Studies and Administration (SNSPA) organized the round table “The Impact of Robotics and Artificial Intelligence on the Future of the European Union”. This event has announced the upcoming European Robotics Forum 2019 to take place in Bucharest on 20 - 22 March 2019.

The meeting enjoyed the participation of:

as well as other stakeholders in the field of robotics in Romania.

“The digital sector already contributes 6% to the Romanian GDP. If we know how to use the financial resources available at European level and our expertise in the field of innovation, Romania can become one of the main players in robotics and Artificial Intelligence. The Romanian Presidency for the Council of EU can be an ideal moment to promote Romanian innovation. The European Robotics Forum, taking place in Bucharest next year, is already a step forward in this direction.“ said Victor Negrescu, Ambassador for the Robotics Community in Romania.

During this meeting, E-Civis also launched the Map of Robotics in Romania (www.hartaroboticii.ro), a visualization instrument for the Romanian robotics community.