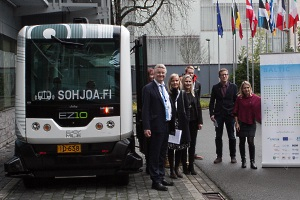 During the European Robotics Week from 20 to 24 November, 30 European and regionally funded projects in the field of robotics are presented at the European Committee of the Regions (CoR). The event was officially opened on Tuesday 21 November by Markku Markkula, the assembly's First Vice-President. Research and innovation topics were also on the agenda of the CoR's Commission for Social Policy, Employment, Education, Research and Culture (SEDEC).

Most of the projects presented at the European Robotics Week exhibition have received funding from Horizon 2020 or the precedent Framework Programme for Research and Innovation. Members of the CoR's SEDEC commission also attended a demonstration of an automated driverless electric minibus which has been tested in Finland as part of the Interreg project Sohjoa Baltic . The project works towards increasing the attractiveness of public transport in the Baltic Sea Region, and in this aim automated buses could be particularly useful for the first or last mile of a journey.

First Vice-President Markku Markkula (FI/EPP) said: "The importance of robotics lies in its widespread impact and in its offer of new solutions to societal challenges: from ageing to health, smart transport, security, energy, environment, agriculture, and many more. This potential can be exploited at local and regional level by developing strategies to build smart specialisation in robotics and optimising the use of structural funds to complement the identified R&I topics. Cities and regions must act as innovation and test labs for the best research ideas, turning them into marketable products and services."

In a communication called "Strengthening Innovation in Europe's Regions: Strategies for resilient, inclusive and sustainable growth", which was published in July, the European Commission sets as its ultimate goal to enable all Europe's regions to build on smart specialisation and this way fully unlock their potential for technological change, digitisation, decarbonisation and industrial modernisation. The SEDEC commission is currently preparing an opinion on this topic, which will also be discussed at the Science Meets Regions conference at CoR on 29 November.

"To respond to the challenges of globalisation, regions will need to work even more together. The strengthening of strategic interregional cooperation and sustainable links between regional ecosystems across the smart specialisation priority areas are key to increase regions' competitiveness and resilience", said rapporteur Mikel Irujo (ES/EA), Head of Navarre Government delegation in Brussels.

In Tuesday's meeting SEDEC members also adopted Alin Nica's (RO/EPP, Mayor of Dudeștii Noi) opinion on the mid-term review of the implementation of the Digital Single Market, exchanged views on the labour aspects of road transport sector, examined implications of Brexit for social, employment, education, R&I and culture policies in European Union and adopted the commission's Working Programme for 2018.

"The European Year of Cultural Heritage 2018, delivering on the European Pillar of Social Rights, responding to demographic challenges and improving the opportunities for youth, design of the new Framework Programme for Research and Innovation and further developments of the Digital Single Market are some of the topics that we will follow in close cooperation with other EU institutions, bodies and stakeholders", SEDEC commission chair José Ignacio Ceniceros (ES/EPP), President of the La Rioja government, summarized.