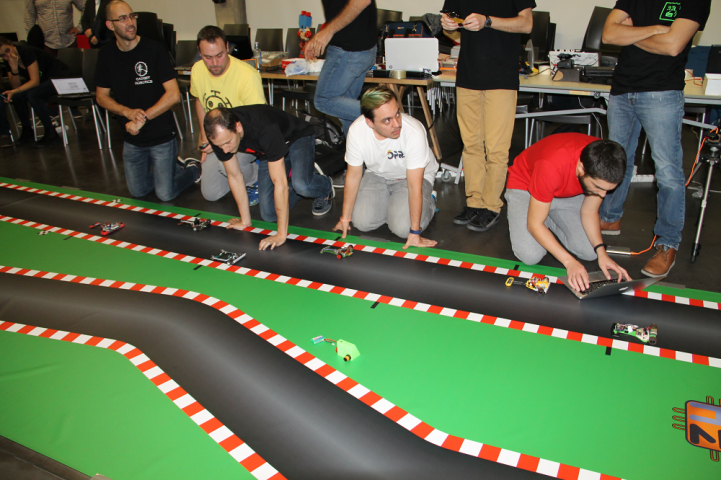 On 24 November the Spanish National Robotics League (LNRC in spanish) celebrated the 2nd event in the 10th season of the yearly calendar. This event was organized within the European Robotic Week activities that help drive innovation through Europe.

The LNRC is the oldest national league to confront autonomous robots in a yearly fashion with standard rules in an open format, allowing the participation of not only universities and research centers but also individuals and companies.

The new category is based on a standard grey gradient circuit where robots must navigate using both sensors for road identification and sensors for opponent identification without any external means of navigation or collaborative behavior.

Robots raced autonomously with their algorithms to give triumph and honor to their teams which score in the professional division of the LNRC coming from several of the regions in Spain: Galicia, Cataluña, Madrid and Castilla.

The results in this category placed the catalan team Dr Gang in first category after there was a draw in the race round and referees had to fall back to the qualification times to decide the winner. Mr Andreu Marsal, lead constructor of the Gadget team was “happy with the result and the hard work the team had done in the last months to adapt to the new format”.

The event got slightly viral on social network showing that competition robotics can be more than just an entertainment and can help drive innovation in Europe. Several teams already have corporative support and loyal audiences.