euRobotics | 16.07.2019
Seventh meeting of the Working Group on Digital Innovation Hubs: the key role of DIHs in a digitised Europe
Tweet 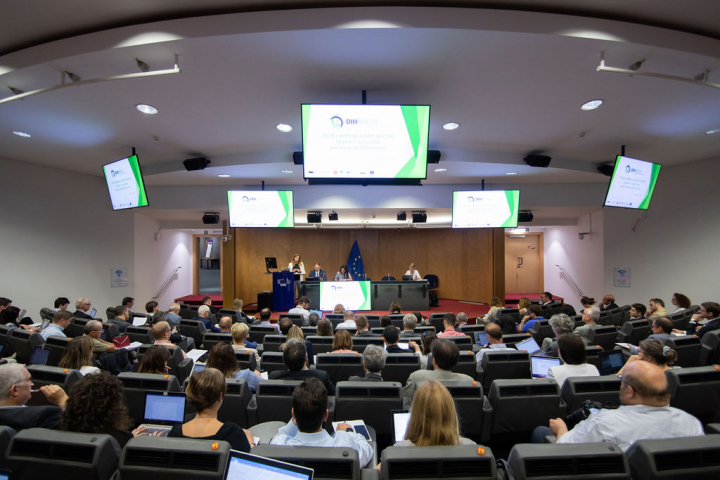 The new Digital Europe Programme aims to develop and reinforce EU’s digital capacities and infrastructure through five key areas: High Performance Computing, Artificial Intelligence (encompassing robotics), Cybersecurity and Trust, Advanced Digital Skills, and ensuring the wide use of digital technologies across the economy and society. The Seventh meeting of the Working Group on Digital Innovation Hubs focused on the role of future European Digital Innovation Hubs in the Digital Europe Programme and their connection with the regional and national policies.

The event hosted by the European Commission and co-organised by the DIHNET.EU project, took place on the 1st of July 2019 in Brussels. More than 200 stakeholders from Member States, regions, industry, research institutions and universities, Digital Innovation Hubs (DIHs), networks, and clusters attended the meeting to discuss how existing DIHs and the upcoming European Digital Innovation Hubs will contribute to support and build a digital future that benefits European businesses and society.

“Digital will certainly be a priority area in the next Commission, as it important both as a new source of economic growth, but also as an element for redistribution of gains to all.” 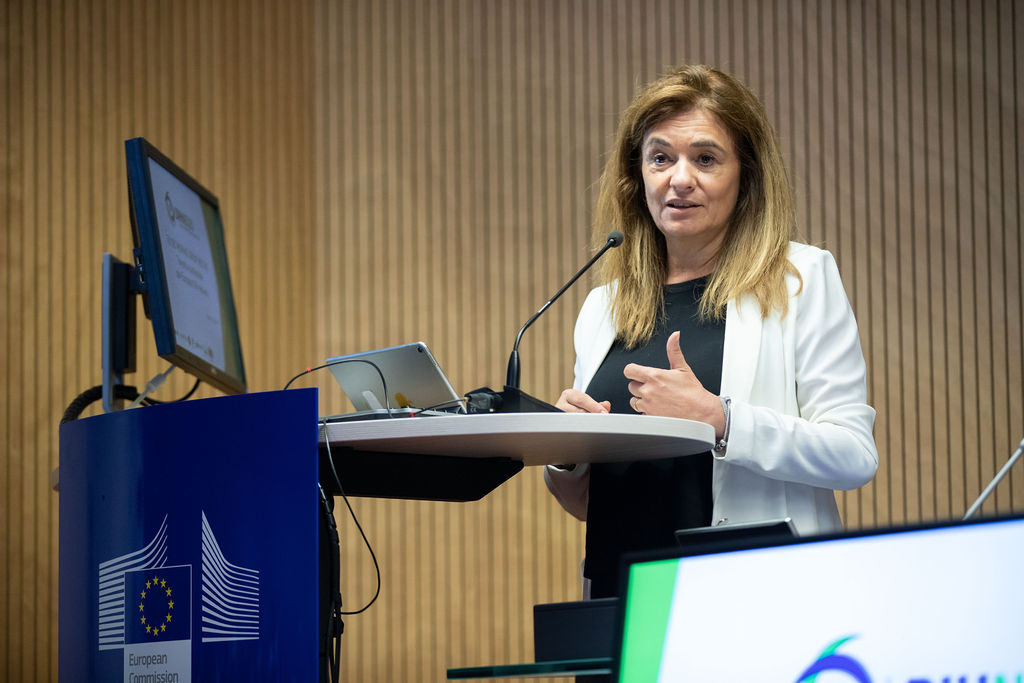 Lucilla Sioli, Director for Artificial Intelligence and Digital Industry in DG CONNECT, stressed in her opening speech the important role of DIHs in driving the adoption of digital technologies by industry and the public sector in Europe: ‘“I have no doubt that Digital innovation Hubs  will remain an important element of the Commission’s policy and will have a key role to play in the diffusion of AI, HPC and cybersecurity capabilities. We would also like DIHs to make a choice in favour of trustworthy AI and to promote the ethical guidelines for AI. We also count on DIHs to provide some of the advanced digital skills needed for making use of these digital technologies.”

Digital Innovation Hubs should reinforce their expertise in certain focus areas, benefitting from HPC, AI or cybersecurity, as explained by Max Lemke, Head of Unit, Technologies and Systems for Digitising Industry, in his keynote presentation: “Over time, Digital innovation Hubs should develop specialisation in some application areas that need one of the key digital technologies foreseen in Digital Europe.”

In Digital Europe, Member States will be expected to co-invest and participate in the selection process of DIHs funded under the programme. Max Lemke emphasised the importance of collaboration at a regional and European level “Member States should work with their regions to see what kind of hubs would make sense for their economy.”, and the cross-border collaboration of DIHs for a successful implementation of the programme.

“Digital Europe will build capacity of the hubs, so they can work across the EU.” 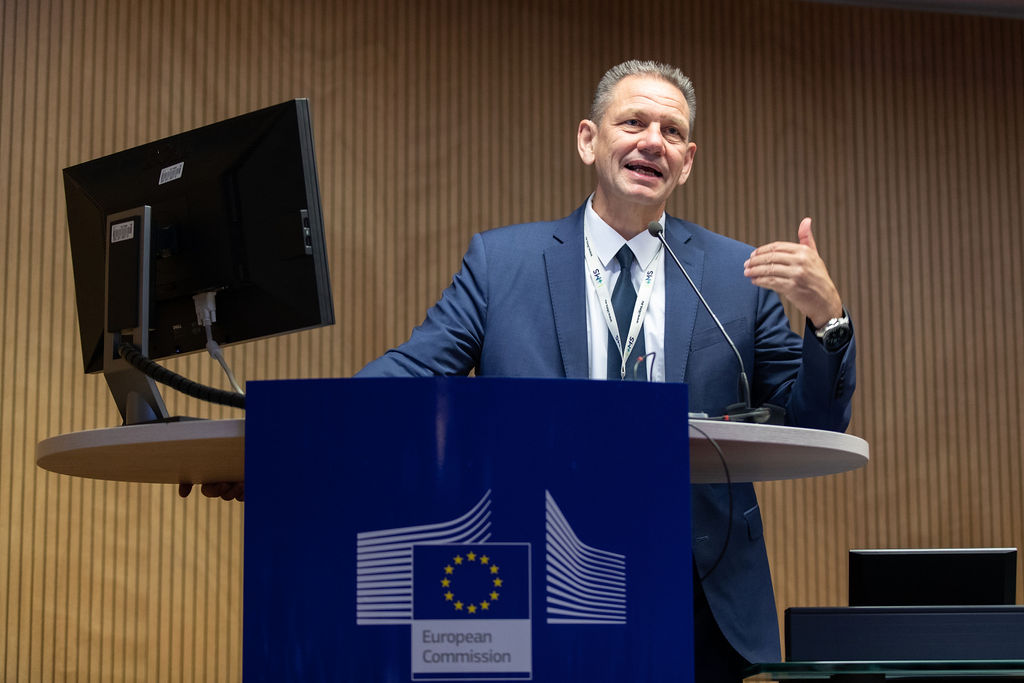 Ruud Baartmans from TNO, representing the DIHNET.EU project,  explained the role of the coordination action on exploring possible approaches to European collaboration between DIHs by strengthening the European DIH network. The DIHNET project aims to create a sustainable pan-European network of networks that helps improve the competitiveness of the European industry.

The introductory session under the theme of “the Digital Europe Programme and the role of the EU DIHs” saw presentations by Pierre-Damien Berger from MINALOGIC, an innovation cluster for digital technologies based in France’s Auvergne-Rhône-Alpes region, Tereza Šamanová from CzechInno, an association dedicated to creating an innovation ecosystem, and Danilo D’Elia from the European Cybersecurity Organisation. The Vice Minister of the Ministry of the Economy and Innovation of Lithuanian, Gintaras Vilda, opened the afternoon introductory session on “Connection to regional and national policies”, that also had presentations by Daniel Saez from ITI, representing the Dig Data Value Association and Gabriel Rissola from the Joint Research Centre (JRC), who host the catalogue of DIHs. 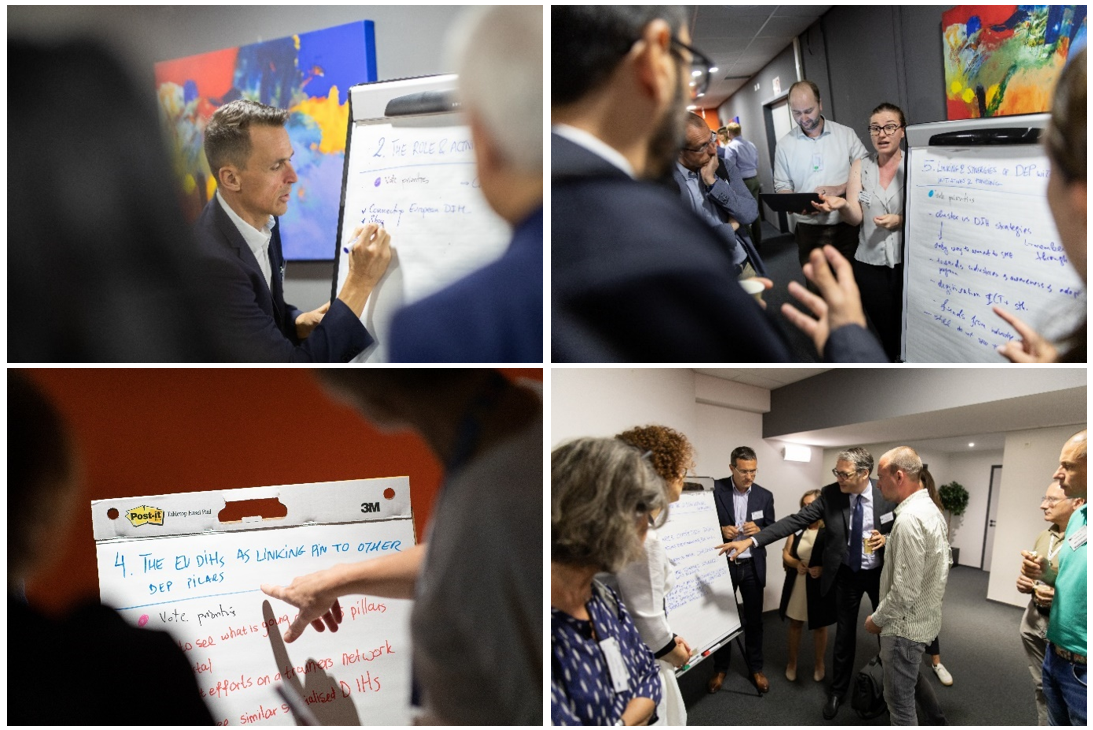 DIHNET.EU partners Begoña Sanchez Gonzalez (Tecnalia) and Mayte Carracedo (Funding Box), reported on the feedback gathered from DIHNET’s Working Groups discussions at the DIHNET Community Platform, and presented the approach  for a respective breakout session. In each of the breakout sessions, attendees could contribute to one or more of the six topics brought forward. The topics of the first breakout gave attention to DIHs under the Digital Europe Programme, while the second breakout addressed the connection to regional and national policies. The conclusions of the breakout 1 and breakout 2were presented during their respective reporting sessions.

A panel discussion on “The development of the European DIH network - Making collaborations between DIHs operational” gave the floor to Ali Muhammad (DIH²), Grégorio Ameyugo (DIGIHALL), Giovanna Galasso (AI DIH Network) and Haydn Thompson (Smart4EU). The thought-provoking presentations resulted in a lively dialogue with the audience. 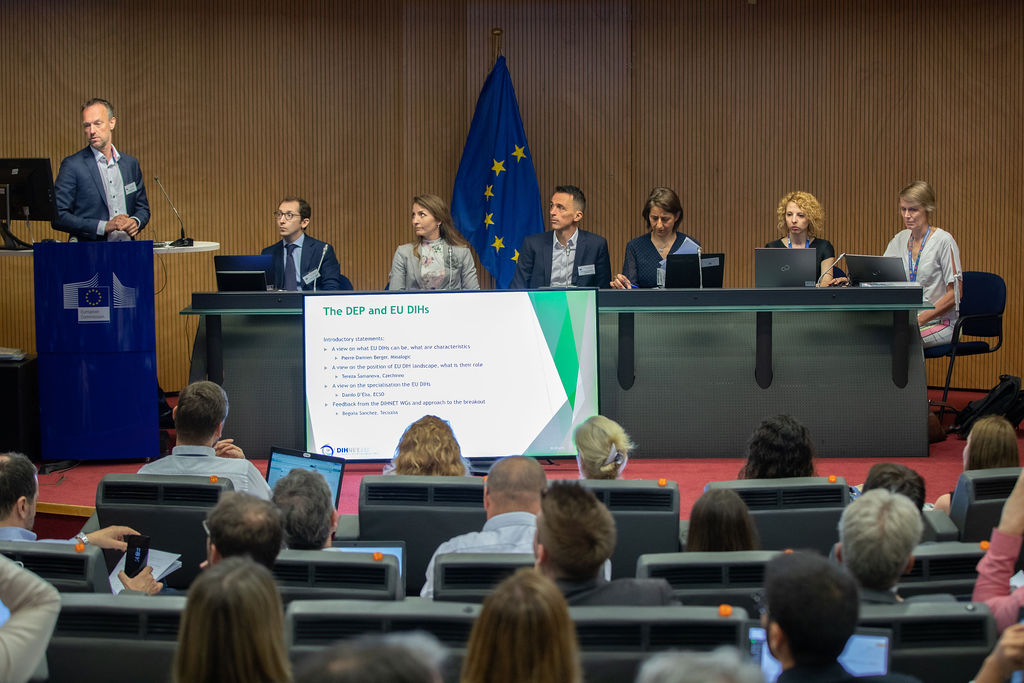 The afternoon session focused on the connection to regional and national policies. Jeannette Baljeu, Member of the Council of the Province of South Holland, Committee of the Regions, was clear on the importance of the role of the regions in the pan-European collaboration on digitisation: “Regions can play a crucial role in modernising industry in the EU, not only through a place-based approach, but through inter-regional cooperation. Regions are also key in setting up, financing and being connectors in the ecosystem. Therefore, regions should show more leadership in pursuing the digital transformation of their industry. As such, regions would like to help in the selection of Digital Innovation Hubs for Digital Europe.”

The DIHNET.EU project launched the DIH Champions Challenge, an annual challenge addressed to the Community of DIHs with the objective to identify good-practice cases of mature Digital Innovation Hubs, foster future matchmaking opportunities and contribute with new information to the DIH catalogue. The call for participation opened on the 10th July 2019, and the winner will be announced in Madrid at the Stakeholder Forum 13th-15th November 2019.

The Stakeholder Forum was one of the events also announced by Anne-Marie Sassen, Deputy Head of Unit, Technologies and Systems for Digitising Industry, during her presentation on the upcoming calls in H2020. The event closed with an open Q&A session. 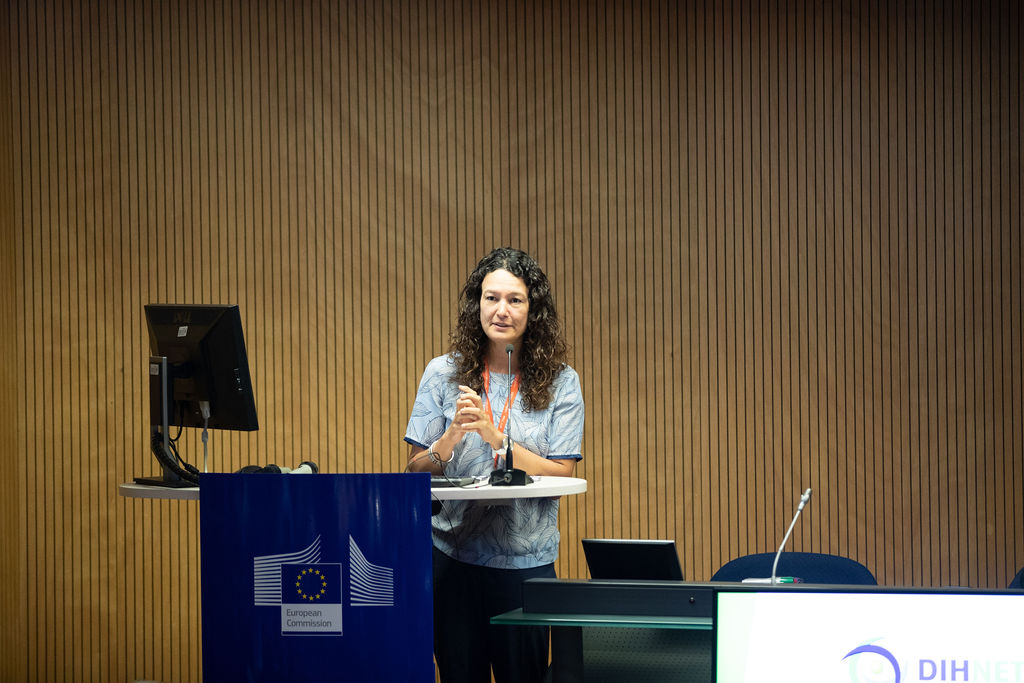 The seventh meeting of the Working group of DIHs closed with the conclusions and remarks by Andrea Halmos, Policy Officer, Technologies and Systems for Digitising Industry.

The workshop embraced a participatory approach, with short, well-focused statements on specific issues; followed by breakout sessions, going into the details of each topic. This format allowed for more open and in-depth discussions, which can continue in the DIHNET community’s working groups. In order to keep the momentum, the plan is to organise a next workshop following a same approach, when comments collected from the 7th DIH workshop, from the working group discussions as well as the forthcoming public consultation on the Digital Europe’s Strategic Orientation can be further discussed. Please follow our news to be informed of the date of the 8th DIH workshop.

All the speakers’ presentations are available on the event website: https://ec.europa.eu/digital-single-market/en/news/presentations-seventh-meeting-working-group-digital-innovation-hubs

The DIHNET.EU project enables the coordination of European, national and regional initiates directly supporting the digital transformation and Digital Innovation Hubs (DIHs). The project aims to create a sustainable pan-European network of networks, with a focus on regional DIHs. www.dihnet.eu

DIHNET has received funding from the European Union’s Horizon 2020 research and innovation programme under the Grant Agreement no 825640.

SPARC is the largest research and innovation programme in civilian robotics in the world, with 700 million euro in funding from the European Commission between 2014 to 2020 which is tripled by European industry, to yield a total investment of 2.8 billion euro. SPARC will stimulate an ever more vibrant and effective robotics community that collaborates in the successful development of technical transfer and commercial exploitation in all regions (old.eu-robotics.net/sparc).