SPARC | 02.05.2017
Smart Robots for Smart Regions (i): Strategies to unleash the potential of the digital economy in Europe
Tweet

After the enlargements of 2004 and 2007, the face of the European Union has changed as regions with different social structures, institutional profiles, urban-rural relationships and environmental challenges have joined. The newly ascended regions have led to a substantial progress in unifying Europe into a peaceful continent, but also brought an increase in the Union’s diversity of cultures and economies. Hence the EC’s Cohesion Policy was considerably challenged, especially at a time when the 4th industrial revolution towards a digital economy had started.

The European Commission recognized quickly that the technological changes would bear a lot of potential for Europe – including the lesser industrialised regions, and started a pan-European innovation campaign.

“Every region, be it more or less industrialised, has a lot to gain; regions should build on their strengths, specificities and know-how to develop their economies, create new jobs, new spin-offs, develop entrepreneurship, and attract investors. They should shape ecosystems covering the entire value chain - from the scientific basis, up to deployment - in order to benefit the citizens, the service sector and the industry. Nevertheless, to take full advantage of such technologies, regions should team up and learn from their experiences, and exploit both expertise and value chain creation complementarities”, explains Cécile Huet, Deputy Head of Unit Robotics & Artificial Intelligence, DG CONNECT, EC.

At Hannover Fair 2015, Commissioner Oettinger announced the Commission’s strategy: "Our ambition should be to empower any business, wherever it is located in Europe, and especially SMEs, to master its digital transition. Regions and local authorities have a key role to play in this effort, with digital research and competence centres leading the way. My objective is to have at least one world class digital innovation hub in every region in Europe. It is my ambition to work with Member States, regions and the private sector in order to mobilise the necessary investments to make this happen. At EU level we have planned at least 500 million Euro of investment in such initiatives in the next 5 years."

The Commission developed a programme which combined Oettinger’s IT strategy with the Union’s Cohesion policy on “Smart specialization of regions”. This was designed to offer a unique opportunity not only to create and maintain excellence, but also to develop new economies, foster research and innovation cooperation, attract investment, spark entrepreneurship, create new jobs, involve local SMEs and authorities, and attract new users to test the technology in public spaces.

With the creation of Digital Innovation Hubs (DIH), the Commission – strongly supported by the Committee of Regions – has presented a plan to concentrate on the regional potential and to provide access to digital technologies and expertise within "working distance" for any industry in Europe, especially SMEs, mid-caps, non-tech companies and organisations.

Robotics has a particular potential for regions, since it combines IT technology with applications for which a region has the competencies. 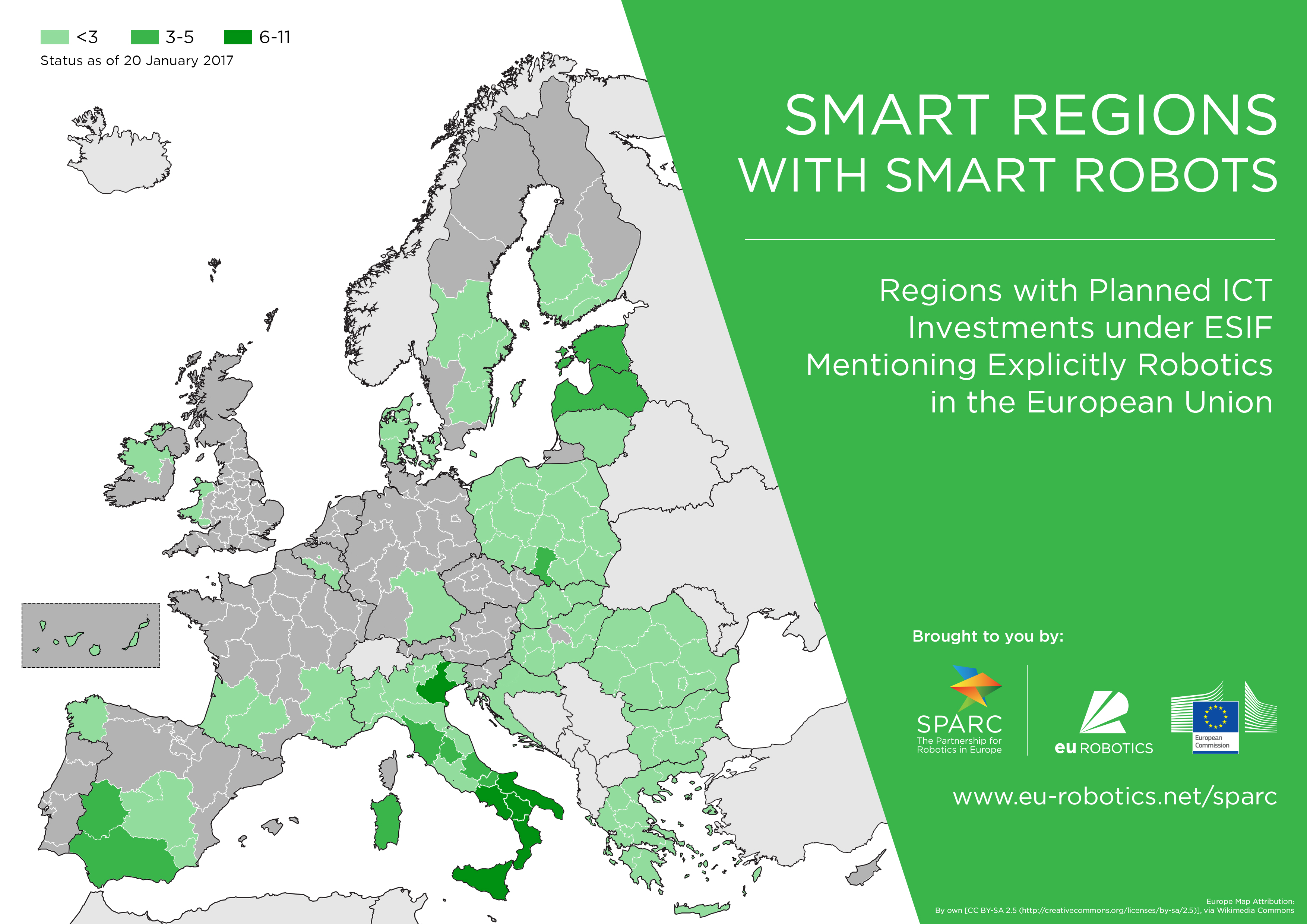 The "Smart Regions with Smart Robots" conference organized jointly by the European Commission, the Committee of Regions and euRobotics in Brussels, on 10 May 2017 is to unveil the riddle behind these challenges. The conference will present several examples and will elaborate on the preconditions and strategies for regions to take advantage of robotics technology for economy and society.

Why robotics for regions?

The importance of robotics today is due to its expanding market size and application areas and to its strong impact on the competitiveness of the EU's main industries. According to a recent study, one million industrial robots currently in operation have been directly responsible for the creation of close to 3.5 million jobs. The European robotics industry is not only a successful industry in its own right – European robotics manufacturers employ about 100,000 people – but it has been creating and maintaining millions of manufacturing jobs in Europe.

“This may be surprising since robotics is usually seen as a job killer. However, some European regions have experienced the contrary. Robotics bears a particular potential for regions, helping them to take full advantage of the “4th industrial revolution”. In recent years, the barriers between robots and humans have blurred, as friendlier, collaborative robots have appeared, leading to increased labour efficiency and making dangerous jobs safer. The new generation  of more intelligent industrial robots have left their cage in mass production and have started permeating into many other fields such as agriculture, mining, inspection of pipelines and, growingly, into the health sector. Even the textile and leather industries, which may have been the dominating industries in some European regions before they were shored off to other countries, can be lucrative again with the help of robots. What robots offer today is versatility and collaboration with humans in such a way that they can be considered a universal machine for craftsmen and small scale production”, explains Uwe Haass, independent robotics consultant.

How can robotics be embedded in the smart specialization of regions? One strategy is to build clusters around existing excellence centres, and regional initiatives, or to develop brand new ones. Sharing physical infrastructure and resources at both regional and European level has many advantages, reinforcing the leading position of the region, but also optimizing resources and funding at EU level.

“Clusters are organized to bring together and share expertise, funding, leadership, and coaching to help make businesses successful, productive, profitable and employ people from the community. Clusters help stimulate innovation and start-ups, and keep workers and stakeholders informed and happy in, and pleased with, their industry”, explains The Robot Report.

Furthermore, each region can choose to specialize in a domain by taking into account the specific added value of the smart specialisation. The strategy is to build on the existing strengths in certain areas and support their development to help them becoming world leaders by specialising and cooperating with the others.

Several regions have identified the opportunities offered by the innovative potential of robotics, thus creating employment and economic growth, such as the following:

Odense Robotics is the collective term for the high-tech ecosystem consisting of robot and automation companies, suppliers, education and research facilities, investment capital and public actors around the city of Odense. The cluster organization behind Odense Robotics is working to develop and support the ecosystem consisting of more than 80 companies and 2200 employees in robotics and automation, 30 institutions working in R&D and 30 different education related to robotic technology.

Watch the video about the Odense Robotics on Business Planet, Euronews:

Robotdalen started in 2003 as an initiative with the target to create regional growth in the Mälardalen region of Sweden by building an innovation system for new ideas within robotics and automation. During recent years, Robotdalen's position has evolved into a role as an enabler of commercial success of new ideas in robotics. This is done on both regionally and nationally, as well as on an international level - however always with the region of Mälardalen in focus.

Robotdalen partners have created 20 new products on the market, setup 19 new companies as well as 400 MSEK of investments in R&D and productivity improvements in the region. Robotdalen is funded by the Swedish Innovation Agency VINNOVA, The European Regional Development Fund as well as the industry, academia and public sector in Central Sweden.

At RoboValley, more than 170 robotics researchers from a multitude of fields collaborate with 40 partner companies, with TU Delft Robotics Institute at its heart. The aim is to accelerate the industry growth, to help start-ups that want to settle in Delft, and to connect companies to the right experts. They also help attract investors via the RoboValley Investment Fund which offers venture capital and accelerated paths to the market for the most promising robotics technologies.

Watch the video presentation of Robovalley:

Robonumerique is a regional initiative for Saint-Quentin (Aisne) and agglomeration, to turn from high unemployment to robotics. It started with a robotics show in 2013 where all citizens could visit the exhibition free of charge, and the initiative has now combined with attracting high-tech companies to robotics. Robonumerique received Trophee Or 2013 for innovative territories, for its strategy of helping companies achieve the best level of competitiveness, to stimulate the creation of innovative start-ups and support the emergence of jobs of the future.

Watch the video presentation of Robonumerique: 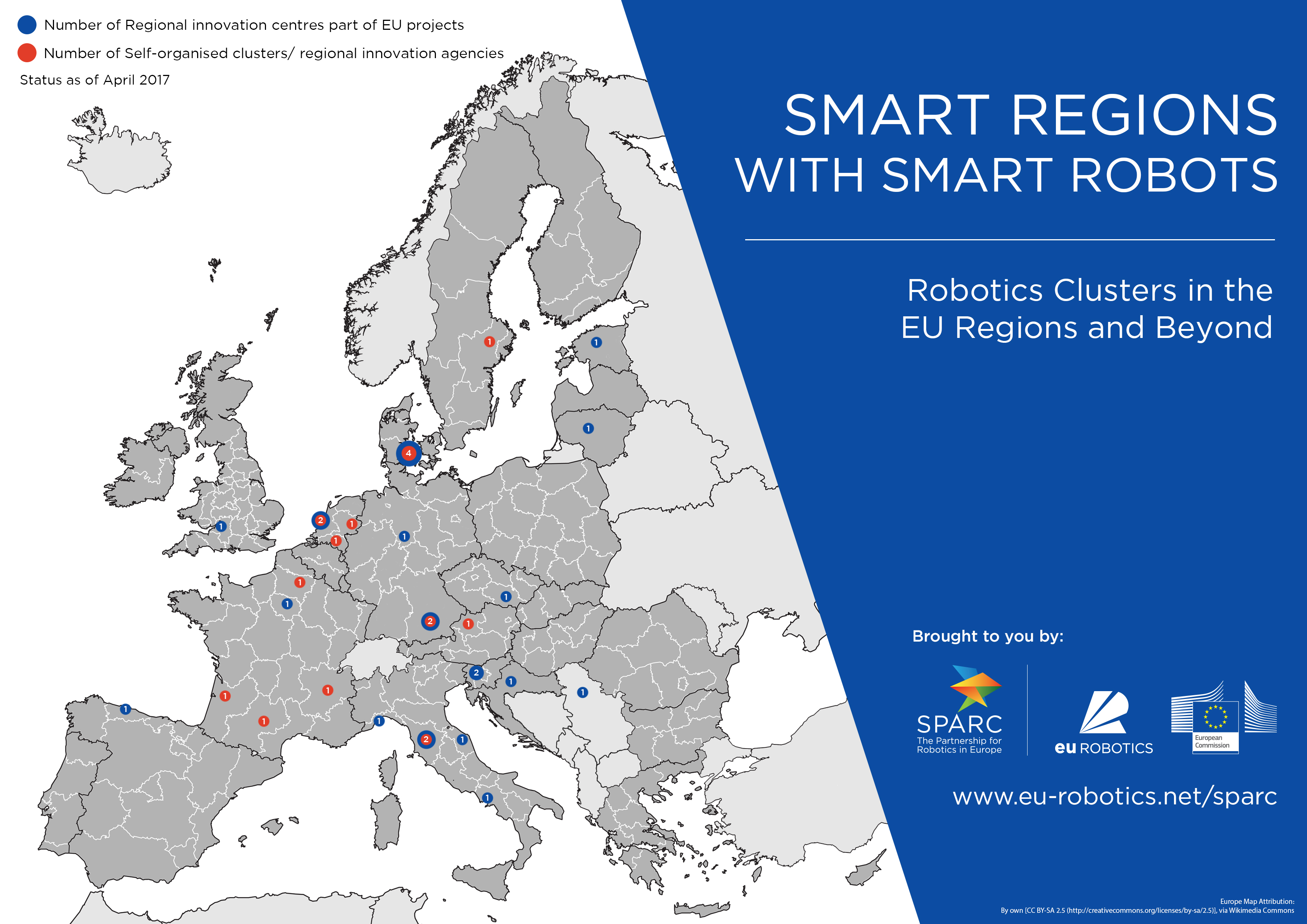