SPARC | 01.06.2014
Enabling researchers to innovate in small scale for the factory of the future
Tweet

For research, teaching and application development for the factory of the future, this robot is here to stay: the KUKA youBot. A small scale omni-directional mobile platform with a five-axis robot arm and a two-finger gripper mounted on top, in the payload range of 20 kg for the platform and 0.5 kg for the gripper. The youBot is targeting primarily research institutions and universities which can easily accomplish their own control and application ideas – thanks to open interfaces and open-source support.

The success story of this compact mobile manipulator reaches back to the year 2009. This year, the EU research project BRICS (Best Practice in Robotics, http://www.best-of-robotics.org) was launched, to determine the best algorithms for robotics in general, and mobile manipulation in particular, using standard platforms. The project, however, lacked the appropriate robot. Therefore, developers of the KUKA Laboratories GmbH used an early educational working model of a mobile manipulator as a basis and proposed to adapt it to the requirements of the researchers of the BRICS consortium. The idea of the youBot development was convincing, the funding was approved and only one year later the first youBots were delivered to the BRICS project. In the meantime, the youBot serves as a reference platform for researchers world-wide and has bootstrapped application development and increased technology transfer from academia to industry significantly.

As part of the youBot development, KUKA Laboratories dealt for the first time intensively with open source. Here, the company was supported by its project partners who actively contributed to a freely accessible software library. This library is not only of interest for the youBot, but suitable for all robot applications in which autonomous mobility and manipulation have to be combined.The youBot is all available without proprietary control to provide maximum freedom to experiment. For this purpose it is equipped with a powerful PC board and an Ether CAT-based drive system. Through a number of additional interfaces a variety of sensors such as laser scanners and cameras can be connected. They enable youBot users to develop their own algorithms and applications on top of already existing open source software.

The KUKA youBot provides researchers and junior roboticists with the hardware basis for a systematic comparison of algorithms and implementations, e.g., in robot competitions such as RoboCup@Work and the KUKA Innovation Award. Because of its small scale it can be used as an experimental platform to try new things safely. Using the youBot researchers can invent in small scale, but nevertheless work on the major issues of the factory of the future. The transfer of the results achieved with the youBot system to industry-grade platforms is easily possible. To this end, KUKA offers mobile manipulation systems such as the KUKA omniRob and the MOIROS system, but also stand-alone omniMove platforms with a payload capacity up to 80 tons and robot arms with a payload of up to 1.3 tons.

The award goes to a Swiss research team

Augsburg/Munich, 4 June 2014 – The winner of the first KUKA Innovation Award for developments in the field of mobile manipulation has been chosen: the research group “Robotics and Perception” of the University of Zurich. 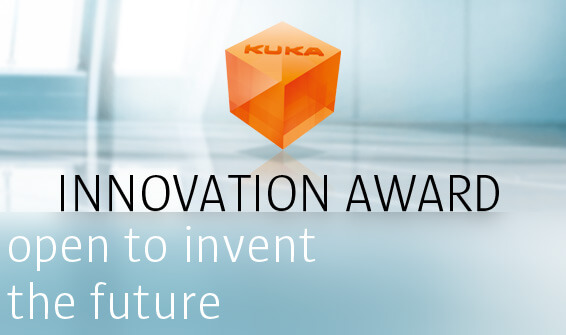 An international panel of judges selected the Swiss team from more than 30 contestants competing for the 20,000 euro award. The official award ceremony was held today at the KUKA booth at AUTOMATICA – the flag-ship international trade fair for robotics and automation. The winning team impressed the panel with its application “Cooperative air-ground robotics: Removing obstacles in the way – search and rescue missions”. This application involves the cooperation of a quadcopter with a KUKA youBot moving along the ground. The quadcopter, equipped with a camera, autonomously flies around a defined area, generates a map and provides the ac-quired data to the youBot. This enables the ground-based youBot to reach its destination quickly in order to provide assistance, for example, in a disaster zone.

Throughout the week of the trade fair, all four finalists of the KUKA Innovation Award presented their applications every hour to AUTOMATICA visitors in Hall A4. In addition to the project of the winning team from Switzerland, three other interesting developments were on show. The Tele-youBot team from Nazarbayev University in Kazakhstan presented “Tele-operation of a mobile robot manipulator using inertial motion tracking and gesture recognition”. The SCORPION team from the Università Politecnico di Milano presented “Self-control of mobile robots for productive industrial operations”, while the German NTH team from the Institutes of Technology of Lower Saxony demonstrated an Industry 4.0 scenario with the title “Self-organised transportation of work pieces in industrial environments”. “We are delighted that our finalists were able to present their exciting projects at such an important trade fair”, said Dr. Bernd Liepert, Chief Technology Officer at KUKA. 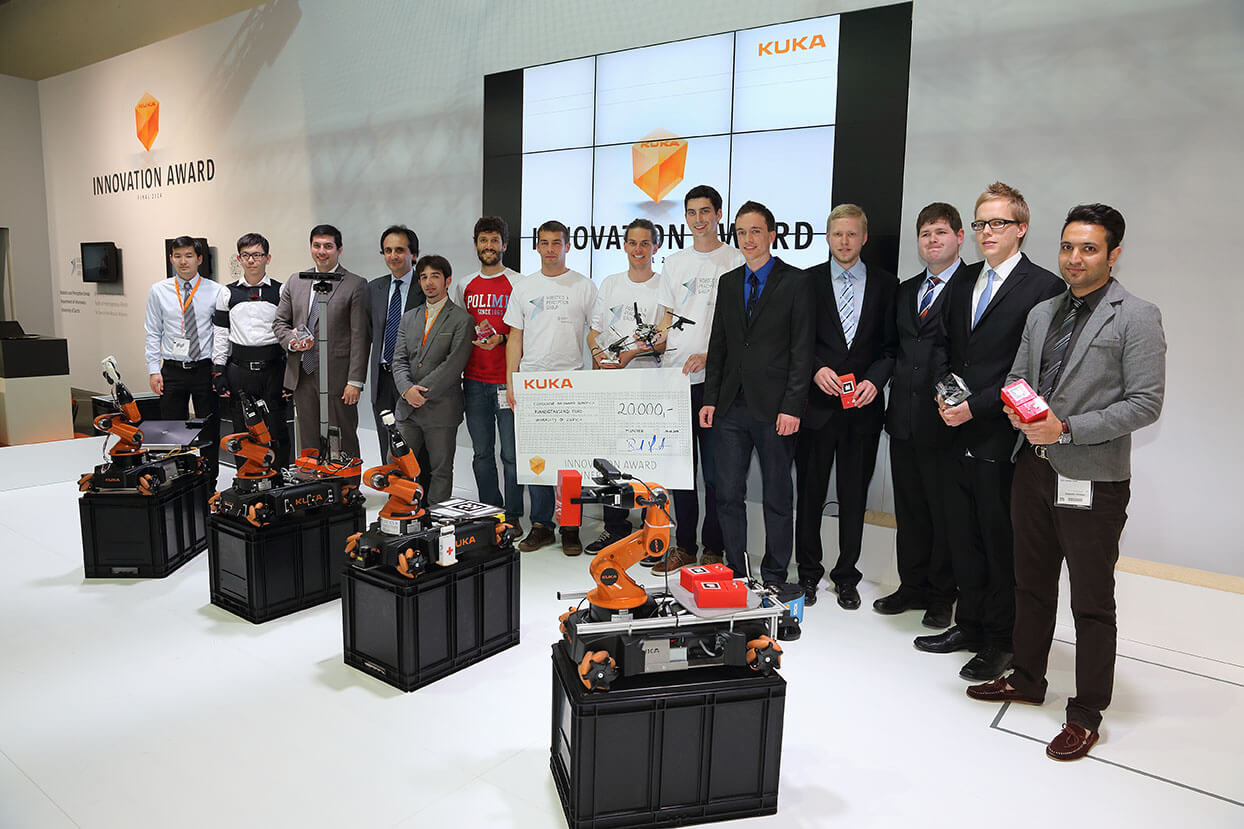 Technology transfer from research to industry

KUKA set up the Innovation Award to optimize the preparation of technology transfer from science to industry. This year, the contestants had the task of demonstrating a robotic application in the field of mobile manipulation in a realistic working environment. In order to ensure identical conditions and thus enable a fair comparison between the participants, the application was to be shown on or with a KUKA youBot.
The KUKA youBot is a mobile manipulator with an omnidirectional base on which a five-axis robot arm with a two-finger gripper is installed. Instead of a proprietary controller, it is equipped with a powerful PC board and an EtherCAT-based interface to the electronic drive system. It also has open interfaces and is controlled using open-source software. “We developed the KUKA youBot with these properties to allow maximum flexibility for research and teaching purposes, but also for application development for the factory of the future”, explained Dr. Rainer Bischoff, Head of Technology Development for the KUKA Group. “It is an experimental platform that can be used for testing and implementing user-specific controllers and application ideas.” It is thus possible to develop, in miniature, concepts that could be utilized in the factories of the future.