Robotics_League | 23.06.2017
Service robots will show their potential in Lisbon
Tweet 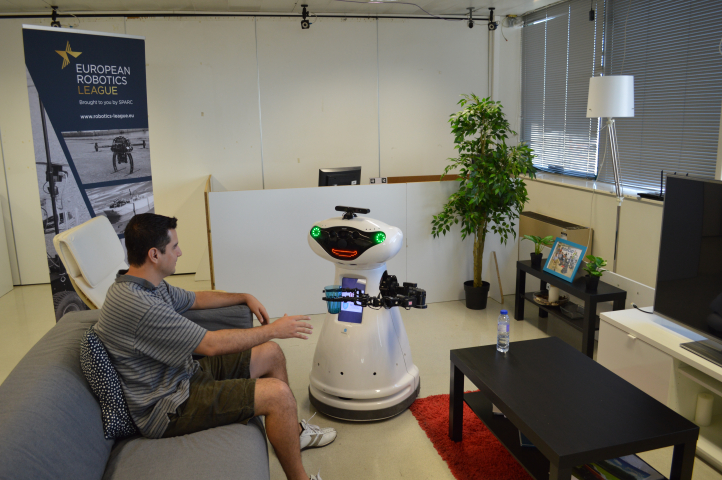 The public will be able to get a preview of the domestic and healthcare services that robots could one day provide during a major robotics competition at the end of August in Lisbon, Portugal.

Five teams will compete to provide robotics services for home and healthcare applications, such as supporting older persons in their daily lives by welcoming visitors and providing a large variety of general-purpose services.

The Lisbon contest will be the second Major Tournament of the Service Robots challenge, which is run by the European Union-funded European Robotics League (ERL). The ERL also runs two related competitions, for industrial robots and for service robots. All the competitions are intended to foster scientific progress and innovation in cognitive systems and robotics.

The Lisbon event will be held on 28–31 August 2017 at the Institute for Systems and Robotics of the University of Lisbon’s Instituto Superior Técnico, simultaneously with the IEEE’s Robot and Human Interactive Communication conference (RO-MAN 2017).

Contestants are likely to have to compete in the following tasks:

• Getting to know my home

The public interested in attending the ERL competition should contact the local organiser Pedro U. Lima at pal@isr.tecnico.ulisboa.pt.

The five teams competing in Lisbon will be:

Teams from EU-based universities and companies can apply for travel grants of up to €2,000 per team per year to take part in the ERL.

For more information about the Lisbon event, including the rules, go to https://sites.google.com/site/erlsrroman2017/

To find out more about the ERL, go to www.robotics-league.eu

euRobotics is a European Commission-funded non-profit organisation which promotes robotics research and innovation for the benefit of Europe's economy and society. It is based in Brussels and has more than 250 member organisations. old.eu-robotics.net