The ERL Consumer Service Robots league is composed of multiple Local Tournaments, held in different ERL certified test beds across Europe, and a few Major Tournaments organised as part of competitions such as RoboCup or conferences such as IROS or RO-MAN. Teams participate in a minimum of 2 tournaments (Local and/or Major) per season (April to February) and get scores based on their performances. An end of season score is computed for each team, using the best two participations in tournaments, and teams are ranked based on their final score.

Awards will be given to the best teams for each of the Task Benchmarks (TBMs) and Functionality Benchmarks (FBMs) per tournament by the local organiser.

The "Best ERL Consumer Team Award" to the best performing team of the Season was presented to Team Homer at the European Robotics Forum (ERF) in Bucharest, Romania, in March 2019.

TBM1:  Getting to know my home 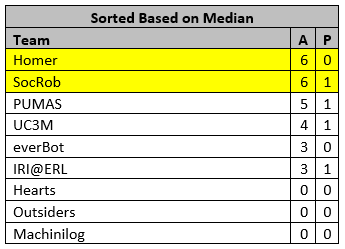